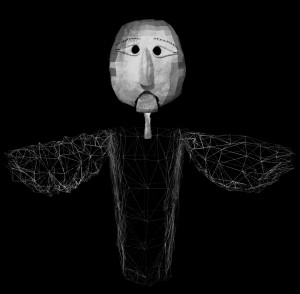 Media artist and VCU professor Semi Ryu presents her virtual puppet performance, “Parting on Z”, at The Project Room for New Media, Chelsea Art Museum on May 27. Parting on Z is real-time virtual interactive puppetry that responds to the puppeteer’s voice, walking balance, and fan movements, integrated with the traditional Korean oral storytelling known as Pansori. This live performance explores the paradoxical relationship between virtual puppet and puppeteer via the distance between avatar and user—symbolic lovers facing each other, continuously exchanging dialogues of love and farewell.

Tickets: $15 general admission, $10 students and seniors, free for CAM Members; tickets are only available for purchase at the door, on the day of the performance.
Chelsea Art Museum welcomes approximately 100,000 visitors each year from around the world. 212.255.0719, www.chelseaartmuseum.org

“Parting on Z” is a virtual puppet performance to be held at The Project Room for New Media, Chelsea Art Museum, New York, on May 27 2009.  Parting on Z connects virtual puppetry with the traditional Korean oral storytelling performance known as pansori (판소리) to explore complicated relationships between the virtual puppet, puppeteer, drummer, and the audience, shaped by multiple layers of chuimsae.

Chuimsae are dynamic interactive actions presented in pansori, taken by the drummer or the audience to encourage the storyteller’s performance, with playful sounds such as
“Ul-ssi-gu!” or “Ul-ssu!”  Parting on Z extends the idea of Chuimsae in real-time interactive virtual puppetry that responds to the puppeteer’s voice (microphone), balance (Wiifit) and use of fan (iPod).  Parting on Z invites the pansori master (storyteller) to be a puppeteer interacting with the virtual puppet on a large projection in real time.  As her binary reflection, the virtual puppet will face the puppeteer from a distance, speaking back her story as real time echoes and mirroring her body in swinging motions.  The audience will be physically and spiritually located between spiraling interactive dialogues of virtual puppet and the puppeteer.

Holding a traditional fan, the pansori master will tell and sing a story, using ancient Korean dialect just as in traditional pansori performances.  In Parting on Z, however, the traditional fan will also be used to navigate virtual space, selecting items to activate virtual puppet actions and 3D tag clouds—semantic maps of oral storytelling lively told in performance.  Activating puppet actions associated with items, she will be able to choreograph visual narratives that will inspire the audience and herself in a live situation.  Traditionally, the role of the fan in pansoriappears symbolic, just as objects in Korean shamanic rituals help the shaman to acquire her altered-state of consciousness.  Puppet motion narratives, activated by the fan, will inspire her storytelling, not just represent it.  They will work as visual clues for the viewer to generate their own story, as well as a semantic map of tag clouds.   In exploring the Meta layer of communication, Parting on Z provides tag clouds instead of Korean-English translations of the original dialogues.  A tag (Meta data) is a non-hierarchical keyword or term assigned to a piece of information.  Tags will be chosen informally and personally, and shaped with corresponding weights.  Considering oral storytelling as a transformative narrative continuously imagined, evolved, and generated by listeners, tag clouds will allow audiences to navigate through and compose their own storytelling.

The story chosen for this performance is the farewell scene from Chun-Hyang-Ga(춘향가), the classic Korean love story that demonstrates the extreme emotional state of constraints called han (한).  Han is a paradoxical state of consciousness that combines the extreme state of grief caused by physical or mental constraints with a great hope and strong desire for overcoming the situation.  It is a fundamental driving source of transformative rituals in Korean shamanism.  Parting on Z explores han in the paradoxical relationship between virtual puppet and puppeteer via the distance between avatar and user—symbolic lovers facing each other, continuously exchanging dialogues of love and farewell.  Dramatizing the farewell scene, the virtual puppet as cyberbody is designed to slowly walk back along the Z-axis, mirroring the puppeteer’s walking steps, thus creating more and more distance from her actual body.  The drummer’s chuimsae will be able to make the virtual puppet return back to the original position; his speech, accompanied by drumming beats, “Ul-ssi-gu!” or “Ul-Ssu!”, serve as dynamic interactive forces to blow energy and cheer the puppeteer.